Can you picture yourself doing Karate when you’re 70 years old?

One famous Karate master, Seikichi Uehara, trained till the age of 97.

He was not alone…

History is filled with Karate masters who lived way beyond the average life expectancy.

What was their secret?

Okinawa has the #1 life expectancy in the world.

It’s one of only five places in the world that qualify as a “blue zone”, which means that life expectancy is higher than average.

As you know – Okinawa is also the birthplace of Karate!

According to research, old Okinawans are good at avoiding heart disease, stroke, diabetes, cancer and osteoarthritis. They also have youthful arteries and superb mental health.

Well, longevity is a combination of both genes and lifestyle factors (nature and nurture). Yet, only 20% of the credit goes to good genes.

The main reason Okinawans live longer is actually their diet!

How do we know they don’t have “super genes”?

Historically speaking, every Okinawan who’s over a hundred ate the same way. This was despite insane improvements in prosperity and wealth. By eating and living the way they always did, they lived beyond 100.

Yet, life expectancy began to change for the generation born after World War 2. Younger Okinawans ate more than they needed by an average of 200 calories. They also consumed more rice, bread, milk and meat. The introduction of fast food also made things worse.

As a result, younger Okinawans have a higher risk of obesity. Their risk of chronic diseases heightened just by changing the way they ate!

There was an interesting study made of 100,000 Okinawans who moved to Brazil. Upon adding pizzas and fast food to their diet, they cut their long life expectancy. Being an Okinawan and not eating like one, introduced many deadly health issues.

So, poor diet has a greater effect than good genes.

This is great news for us Karate Nerds – because we have the key to changing our lifespans!

(And, even better, be able to do Karate everyday!)

All we have to do is to eat like the old masters from Okinawa.

8 Rules of the Okinawan Diet

The secret to eating like an Okinawan is simple:

Your meal needs to be low in calories, but high in nutrition.

If there’s only one thing you remember from this article, make it this.

This is a scientific observation of the traditional Okinawan diet.

To achieve this, there are 8 guidelines.

(I explained this in one of my Karate Nerd in Okinawa episodes.)

Why? Because overeating stresses the body and causes inflammation.

Longevity studies have shown that this is a quintessential factor.

Also, if you end up in a street fight, you’ll be more ready to fight if your belly is not full.

That’s what one Okinawan Karate master told me…

Like mentioned, the Okinawan diet is low in calories, but high in nutrition.

The best way to achieve this is to eat more vegetables, herbs and soy legumes.

Below is a list of common ones in Okinawa.

(Note: If you can’t find these in your supermarket or Chinatown, use local alternatives.)

Based on the traditional diet (in 1949), sweet potatoes make up 67% of an Okinawan person’s daily meal. It effectively replaces rice (12%).

Moreover, the Glycemic Index (GI) score for sweet potatoes can be as low as 55. This means energy is released slowly, which allows you to feel full longer.

Benefits: Often seen as peasant food, the sweet potato is rich in many antioxidants. This includes vitamin A, C and E. It also contains vitamin B6, which lowers the risk of heart disease.

Preparation Suggestions: Wrap in foil and toss it in the grill. Or boil in medium heat to make mashed sweet potatoes.

I actually ate sweet potato just before publishing this article!

Love it with sea salt sprinkled on top.

Okinawans eat lots of soy-based food like tofu and miso soup. These are super rich in flavonoids and protein. Okinawans use the goya (bitter gourd) in various cuisine. Not only is it low in calories, but it’s also high in fiber and vitamin C.

Personally, I can’t stand the taste. Goya is one of those “hate it or love it” foods.

Preparation Suggestions: Before you cook it yourself, try an Okinawan or Chinese dish cooked with bitter melon at the restaurant. If you like it, ask for the recipe. You may find the bitterness difficult to handle.

Benefits: Shiitake mushrooms appear to boost the immune system. It also lowers lipid levels, which suppresses fat production. Shiitake also contains a form of lentinan, used in an anticancer drug in Japan. Patients undergoing chemo have a better chance of survival when lentinan is used.

Preparation Suggestions: Soak the dried shiitake in water first. Then, use it in brothy soups if you’re adventurous. I like to put it in meat sauce. Otherwise, stick to any Okinawan recipe you find online.

What we call seaweed, is actually algae of various types.

The ones eaten by Okinawans include; konbu, mozuku, suunaa, hijiki, wakame, shinomata, nori and gain. Common ones you find in your supermarket are the wakame and konbu seaweed. 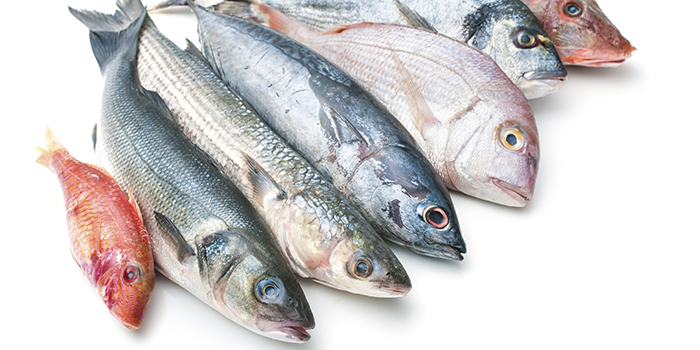 This gives them nice Omega-3 levels.

Make sure you cook your fish in a healthy way though. Consider steaming or grilling your fish. Avoid deep frying.

At first, researchers thought the addition of pork was unusual in the Okinawan diet. They ignored it as they believed pork wasn’t contributing to their longevity.

After all, pork is high in unhealthy fat, right?

But, what they discovered was that Okinawans stewed pork for days, and skimmed off the fat. What was left was actually high-protein collagen.

Believe it or not – collagen helps with joint recovery!

So, if you want to eat pork the Okinawan way, simply remove as much fat as possible and stew your pork for days.

If that’s too much work, opt for lean meat alternatives, or even collagen supplements.

#4 Higher Proportion of Low GI Carbs in Your Meals

Okinawan food is high in carbohydrates (like most Asian diets), but low on the Glycemic Index (GI).

This is why a traditional Okinawan meal, of which 85% of the calories come from carbs, doesn’t induce massive weight gain.

For fun, check out this table that compares nutrition proportions between the Okinawan Diet and new generation diet:

PS. Guess what the most commonly eaten form of carbohydrates is?

Sweet potato! Remember to sprinkle the sea salt on top. 🙂

#5 Include Omega-3 in Your Diet

We covered this briefly in the “fish” section already.

Soy and fish products are rich in Omega-3 fatty acids. This not only aids in brain function, but also lowers risk of heart disease.

So, add Omega-3 to your diet if you want to remember your kata in old age – and be able to perform them as well!

If fish is not your thing, you can supplement with O3 pills.

But natural is best (more bioavailable)!

This might be the reason why Okinawans have less hip fractures than others. Vitamin D also helps testosterone production, which is good for physical performance.

In other words – get sunshine and calcium!

There are some “blue zones” that incorporate dairy as a longevity food.

However, Asians have a different food culture, which means they are often lactose intolerant. This explains why old Okinawans don’t consume milk.

It simply gives them the “geri” (diarrhoea)!

As a Westerner, you might tolerate dairy products better than Okinawans. So this is a grey area. If you want to consume dairy, make sure it has the right nutrition/calories proportion.

Too much alcohol may actually reverse the benefits of the Okinawan diet.

The main benefits of alcohol consumption are the social aspects, which have been shown to contribute to a happy life.

So, drink with your buddies, in moderation. But don’t expect it to directly improve your Karate performance, health or recovery.

Personally, I’ll have a glass of red wine sometimes.

Okay, so we covered the main points of “The Karate Diet”.

But what about having the stamina, mobility, strength and mental health to train Karate at old age? 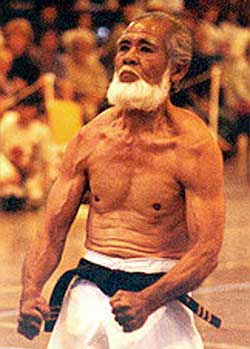 Other than eating right, the most important thing is to keep practicing Karate!

Funakoshi Gichin, the founder of Shotokan said it best:

“Karate is like boiling water – without heat, it returns to its tepid state.”

Continue practicing Karate, because the moment you slack off, you’re doomed.

So, make sure Karate remains a habit even in old age.

It’s a key to long life!

As a committed Karate Nerd, here’s what you need to do to live a long and happy life: 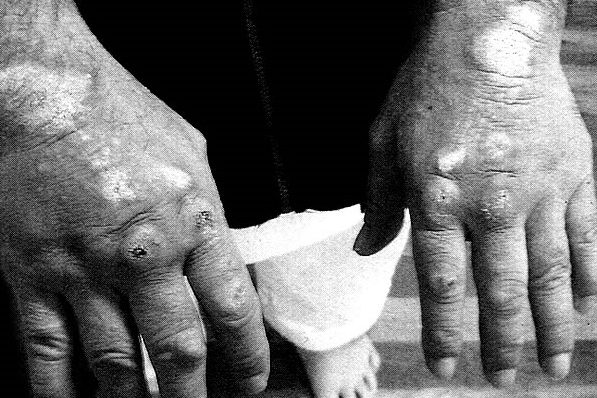 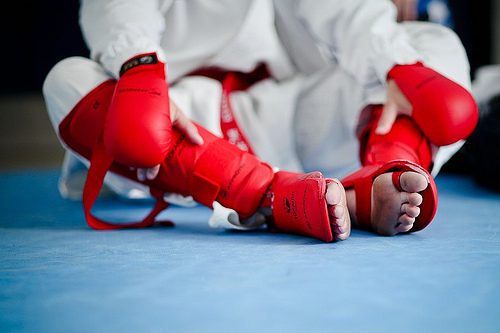 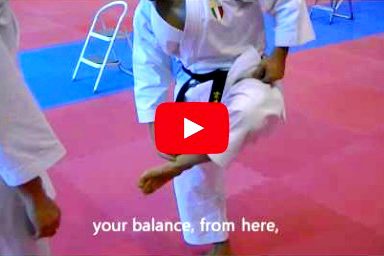