We often read about these (supposedly) great masters of Karate, with their seemingly supernatural skills and abilities. It’s in almost every book on Karate (and believe me, I have read most of the ones worth reading)!

What do we make of these stories?

These small remarks like “His fingers were so strong that he could pierce the enemy’s side and rip his ribs out.” Or “He crushed his opponent’s Adam’s apple with his vice-like grip”.

(Okay, that last one was maybe a bit over the top.)

Should we take them for the truth? Or are they simply exaggerated stories, made up by some sly author to inspire us in our pursuit for Karate-enlightenment?

But you never know.

So… is there some way for us to somehow take a look at these deceased masters for ourselves? To see if they were the real deal? Well, there are some old videos out there, but they can be hard to find. And they are often of poor quality (but not always).

So, what do we have left?

You see, there are plenty of pictures of the old masters, both Karate and Kobudo. You just have to know where to search (hint: inside old books). Most of it is not on the internet (yet) actually.

So, today I thought I would share some pictures with you of Gusukuma Shinpan (1890-1954) (who I have written plenty about before). He’s one of my favorite “old guys”.

And if you want to see pictures of him, one special old book is better than the rest:

Described by famous Karate researchers as “legendary” and “the book of the era”. This rare masterpiece (standing in my bookshelf of course) features so many pictures of the old masters that it’s almost too good to be true.

Now, I’m not saying that you can see any real “skills” from photographs.

Nope. At least I don’t think so.

But… I do believe you can see certain things like body alignment, angles, posture, techniques, distance, and other small details that can give hints.

And sometimes these things can’t even be seen on video, or in real life (especially if the teacher is fast)!

And let’s do it carefully (a picture says more than a thousand words)! 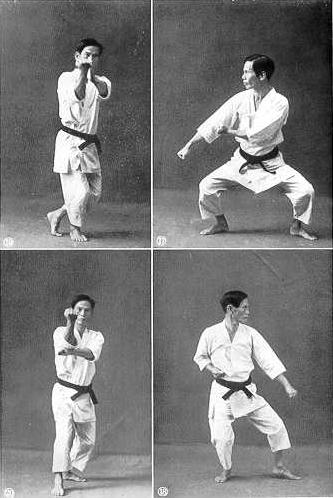 These picture are clearly from kata Passai/Bassai and perhaps some other. 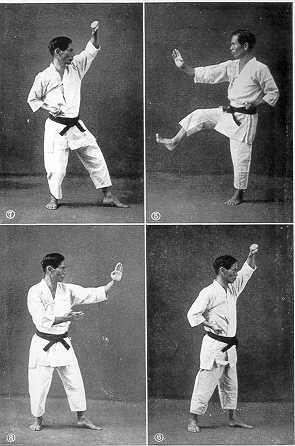 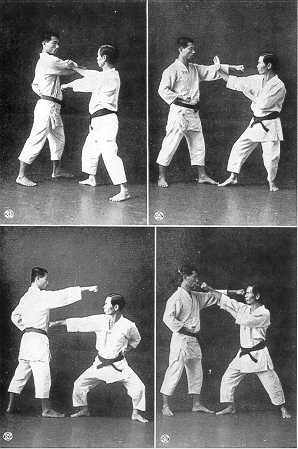 The classical “shiko dachi jun-zuki”(lower left picture) is seen, as “made famous” by Funakoshi Gichin. A typical Itosu-style move. 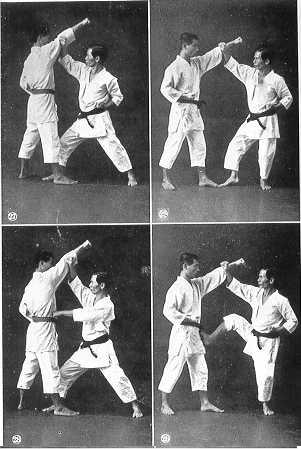 Using jodan/age-uke as close quarter technique (top left for example) as well as from longer distance, with the mae/shomen-geri (lower right).

The kumite to the lower left reminds me of Motobu Choki. In fact, it’s almost the exact same technique. 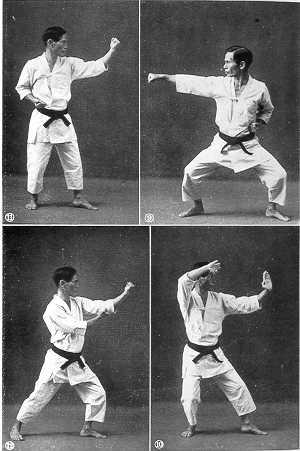 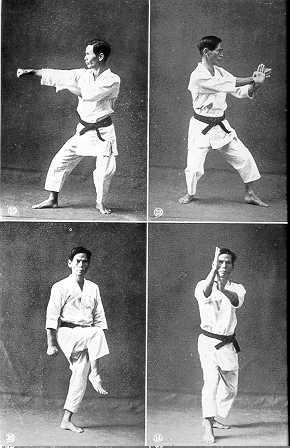 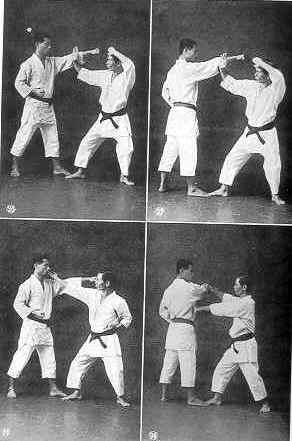 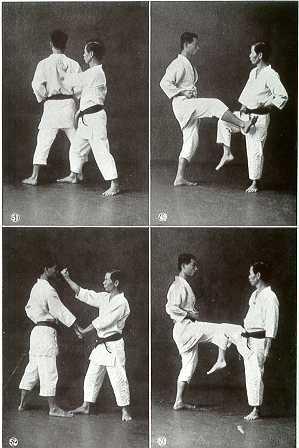 These are a interesting. For example, top left we have a mawashi-uke, not your typical Shuri-te technique. Not your typical target for it neither. We also have knee strikes, thai-style shin blocks (sune-uke) and osae-uke with uraken (lower left). 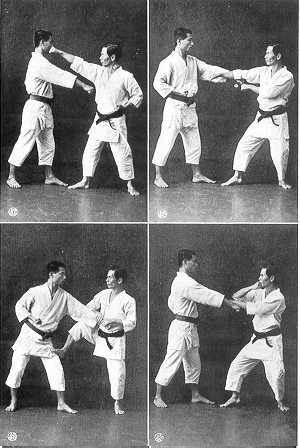 I see some Kushanku/Kanku Sho in there (top right) and possibly Passai/Bassai (lower left).

Can it be Seienchin (lower right)? Since we just saw the mawashi-uke, who knows? After all, he did train briefly under Higaonna Kanryo, the “father” of Naha-te (Goju-ryu etc).

Cross-training is not new. 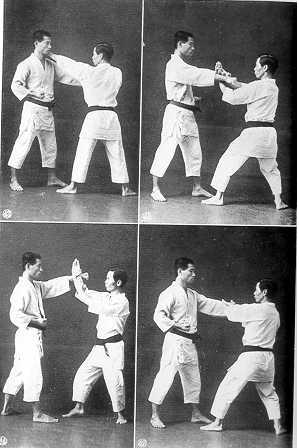 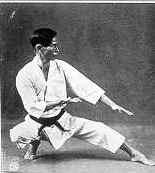 The old Kushanku/Kanku Dai technique, that has ceased to exist in all styles today, except Shotokan (!) for some reason.

Today mostly done with the top hand a bit lower.

Or maybe not if you’re a short Okinawan… 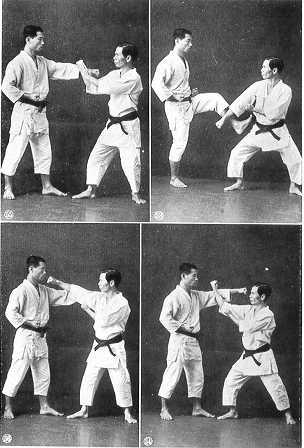 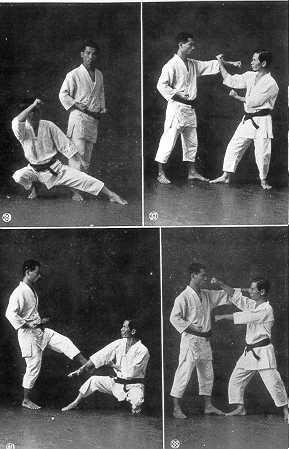 And then the last picture.

Motobu-style kumite again (lower right), with some simple Kushanku/Kanku Dai bunkai, similar to what Funakoshi Gichin wrote/showed in his books.

Evidence right in front of you. 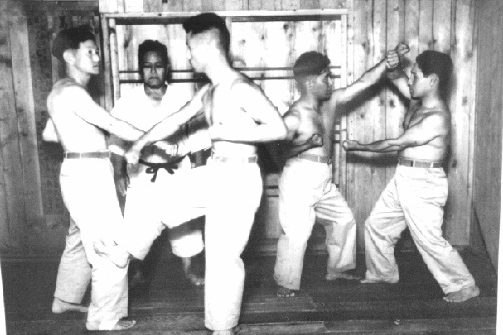 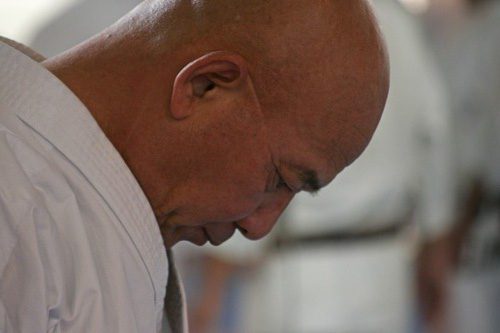 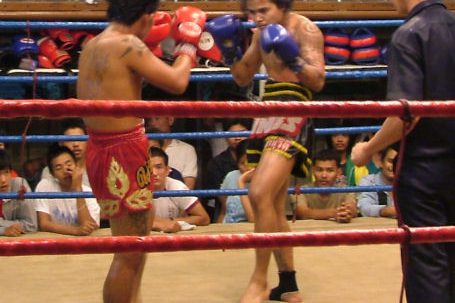