I remember when I first went to Okinawa for Karate and Kobudo training.

Though it was a long time ago (I was only 9-10 years old), I still have some strong, vivid, memories.

I first saw the tsumasaki-geri at an old Goju-ryu dojo. It was a humid August evening, the training was about to start, and the sensei of the dojo was warming up by repeatedly kicking his big toe into a wooden post.

For those of you who are unaware, tsumasaki-geri is a special kick done with the big toe supported by the toe next to it, and it is only found in Okinawan Karate (as far as I know).

Curious as I was, I went forward and looked closer at the strange kick he was doing and a moment later I had gotten myself into a private lesson in the secret art of kicking with your big toe: tsumasaki-geri. 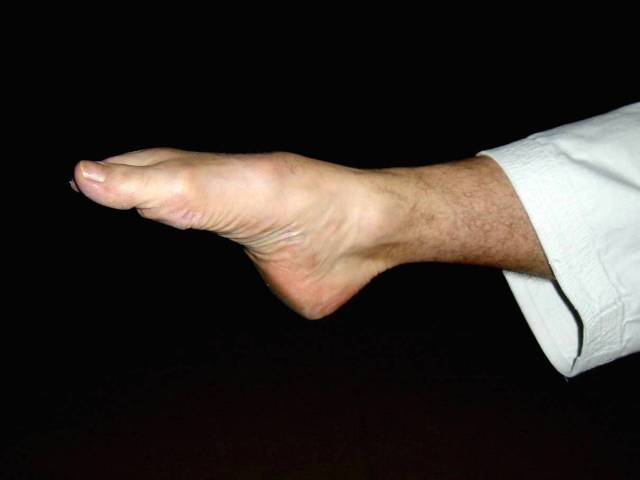 (Okay, I admit, that’s not the best picture, but it was the only one I could find on Google).

Tsumasaki-geri is mainly used by the “older” styles of Karate in Okinawa, and the young generation has hardly ever heard of it. Well, why should they? It doesn’t give any points in tournaments! Using the tip of the toe as a striking surface can be very powerful, dangerous, precise and penetrating. Definitely not suited for sports.

There are even several stories of old masters using the tsumasaki-geri. Here is one about a man named Ishimine:

One night Pechin Ishimine he was on his way home in the capital city of Shuri. He was climbing a hill during a drizzling rain when he encountered a large powerful man known as Tamanaha, who had been resting. The two struck up a conversation, and continued their journey together. Recognizing Ishimine, who was a students of Matsumura, Tamanaha who was obviously a bit of a rebel- rouser, sought to provoke a fight.

Tamanaha attacked with a strong punch, but Ishimine quickly dodged to one side and ended the encounter with a quick toe kick to the attacker’s lower rib cage. Tamanaha fell to the ground, unconscious. Not wanting to leave him there, Ishimine then threw the unconscious body over his shoulder and took him home. Tamanaha, however, died a few days later.

What matters is that tsumasaki-geri was used in the story. And many old Okinawan masters swears that it is the old way.

Now, if you look at where it is used today, you will see it for example in Matsubayashi-ryu (mainly in the kata Chinto) and in Uechi-ryu (where they call it sokusen).

So where am I going with this?

Well, when I received that private lesson on how to execute a tsumasaki-geri in Okinawa, something struck me as interesting. I was told by the sensei that tsumasaki-geri is the “old” way of kicking, along with the low side-kick (sokuto-geri), and using the ball of the foot in kicking, like we do today, is a modern phenomenon. “Most of today’s Karate-ka have never even seen a toe kick.” I was told.

But today, I don’t know…

Is that really the truth?

Is using the ball of the foot such a modern thing?

Just so everybody knows, here’s a picture (not my foot) of a kick done with the ball of the foot (mae-geri):

Well, going back to the roots of the civilian fighting traditions, I have done some research.

Pankration is an ancient Greek Martial Art introduced to the Greek Olympic Games in 648 BC and founded as a blend of boxing and wrestling. The name Pankration literally means “all powers”. In other words, everything was allowed. Today we would call it MMA (Mixed Martial Arts).

Some even consider Pankration to be the first all-encompassing fighting system in human history.

So what better place to look for “old techniques” than here? Well, I don’t know! So, I decided to see if I can find any evidence, any traces, of “ball of the foot”-style mae-geri in the ancient art of Pankration.

After a few hours of searching around the net, I finally got some results.

And they are nothing to sneeze at.

Just look at these pictures:

These are old Roman bronze statues, dating from 0-200 AD.

And whaddya know, they shows a Pankratiast kicking. With the ball of the foot!

But it doesn’t end there. Oh no.

From an old vase. Catching the ball of the foot -kick, and attempting a submission.

And the best one: A scene of actual combat from the Parthenon’s wall sculptures (in this case the opponent is a Centaur, a mythological creature which served as a symbolic depiction of the invading Middle Eastern warriors, and not a mythical beast in a literal sense).

The Parthenon is considered the holiest of holies for the people of ancient Athens.

And what do we see?

The ball of the foot being used.

In fact, there is no evidence whatsoever of Pankratiastes using the kicking techniques popularized by Karate today:

Only straight, powerful, ball of the foot -type mae-geri.

So, what is the conclusion?

Well, tsumasaki-geri, kicking with the toes, might be the “old way” in Okinawa…

But compared to our normal mae-geri, tsumasaki-geri seems like a relatively “modern phenomenon”.

In your face, old Okinawan masters!