With only one week left until the World Traditional Karate Kobudo Tournament held here in Okinawa, things are getting a little hectic over here. I can safely say that I have never seen so many foreigners at once during my 5 months here.

This will be the biggest Karate event held in Okinawa ever, that is for sure. Three intense days of demonstrations, seminars and competitions. I checked the lists for the tournament earlier, and in the adult male black belt kata division there are 250 participants!

So, to meditate a little (and gather my hidden ki-force for the tournament), yesterday I escaped the city life and took a trip to Shikinaen park, a UNESCO world heritage site.

Here is the proof of that: 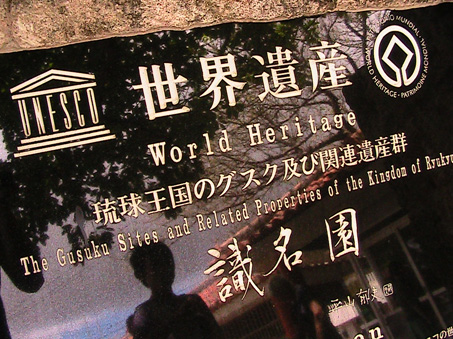 There are only a few UNESCO places in Okinawa, and among those Shikinaen park is a place I have wanted to visit for a long time. But not for it’s scenic beauty or tranquil ambience…

But for the many connections it has with Karate and Kobudo.

Not many people know that though. They just think “What a nice park”, snap some photos and eat some ice cream. But if you have the right knowledge… Shikinaen park is much deeper than your average park.

So let’s take a trip through Shikinaen park together. And let’s do it from a Karate (and Kobudo) point of view. 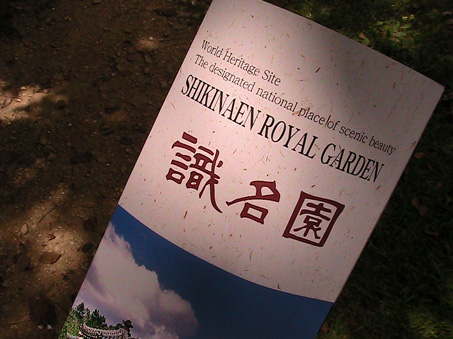 This is what they never tell you in the pamphlet. And forget walking hour after hour in the hot sun and paying entrance fee…

I already did that for you.

First of all, you should know that Shikinaen park was an exclusive “entertainment-park” for the VIP’s of the old Ryukyu Kingdom. Whenever the king felt he wanted some rest, this was the place where he went. Or if the king had some important guests from China, here is where they were brought.

So let’s begin by entering through the main gate: 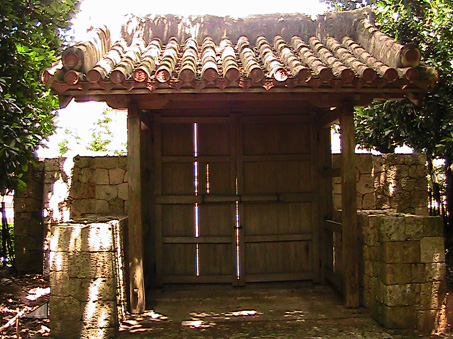 This gate was the main entrance of the park. Today it is closed as you can see, so I actually entered through another place (where I had to buy a ticket).

Since Shikinaen park is a garden built in a mixture of Okinawan, Japanese and Chinese styles, you will notice some changes in style here and there. But that is simply the Okinawan way. And I think it looks nice.

Anyway, directly after entering through the gate, you encounter this small house: 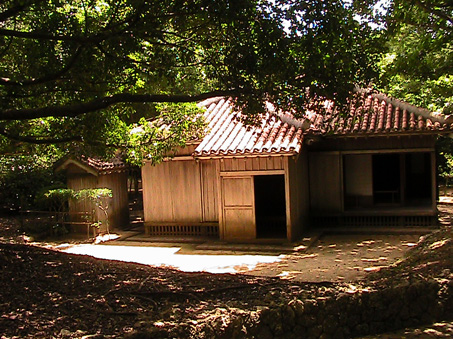 Here is a side view: 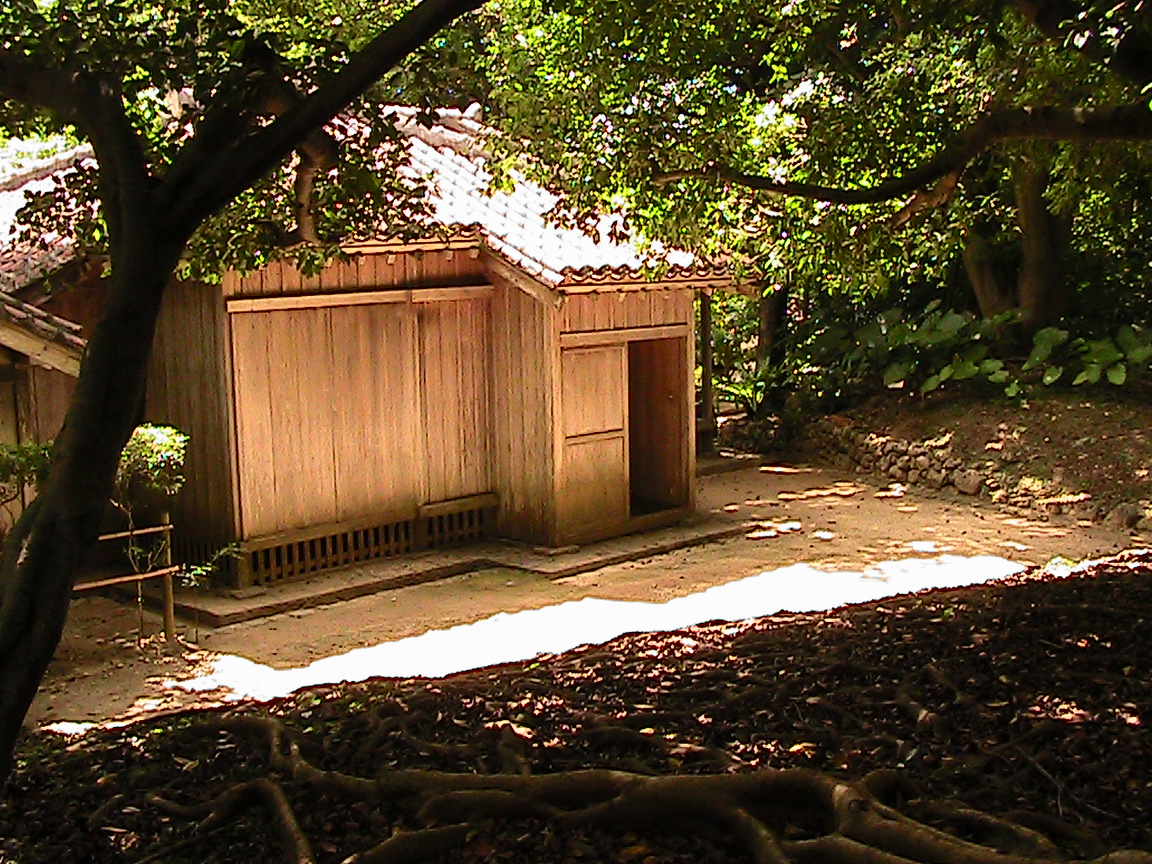 “Is this the kings palace?! What a poor king!” you might think. Then think again. Because this is the Banya – guard house.

Anybody who wished to visit the king had to get through this guard house. Here is a close up of the sign in front of the house: 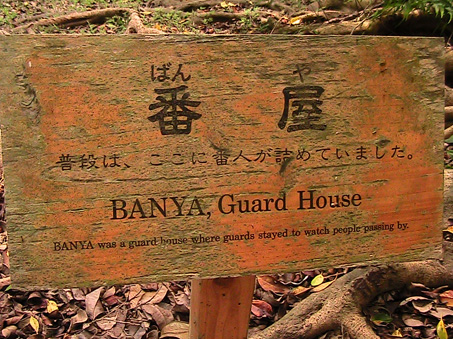 Now, considering that “Bushi” Matsumura Sokon, one of the most famous masters of Karate ever was the kings personal bodyguard, forcing your way through the guard house to see the king was probably not a good idea back in the days. Matsumura was the personal bodyguard for three kings, and this house was where he stayed during the kings’ visits here.

You can almost feel the “Karate” in the air…

Of course the original guard house was destroyed during World War 2 (as was the rest of the park) but this is an exact replica, at the exact same spot. The whole park (42’000 m²) actually took 20 years and 800’000’000 yen to restore after the war.

Okay, so let’s say you were on friendly terms with the king, and didn’t have to fight Matsumura (good for you) at the guard house. If he’d let you pass, you would then go down these stairs:

(You see the guard house in the background) 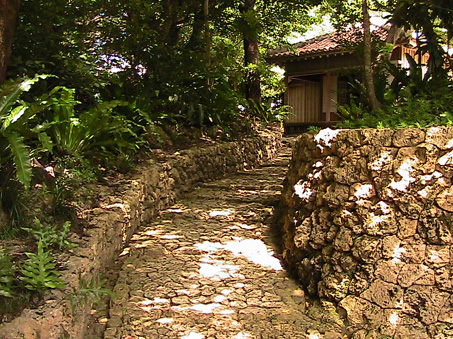 After walking down the stairs, you finally reach the backside of the kings palace (called Udun in Okinawan).

It’s not that pretty, really: 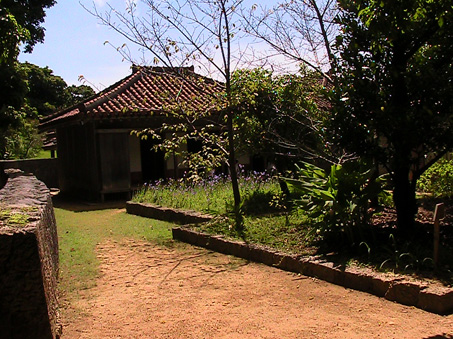 It just looks like a small, regular house, with a big ugly tree in front. And some dust on the ground.

But maybe this was done intentionally? Because, think about this: if you put something ugly next to something beautiful, the beautiful looks even more beautiful, right?

So… by not making the backside of the kings palace look that spectacular, the front looks even more impressive.

Here are some pictures of the front: 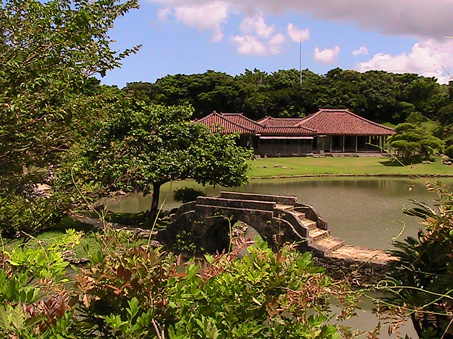 (The kings palace is the big house behind the pond.) 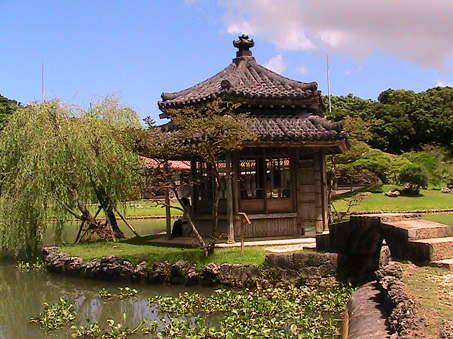 A small hexagonic house. Perfect for a barbeque? 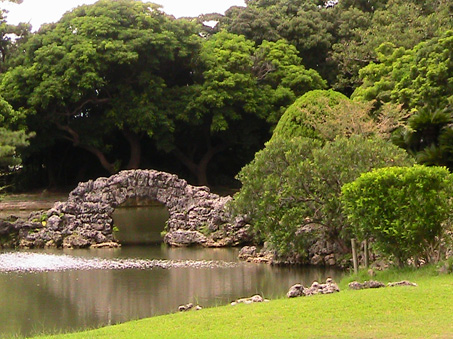 As you can see, I didn’t bring my best camera… But you get the idea.

Now, since you have seen most of the garden, let’s step inside the kings “palace”: 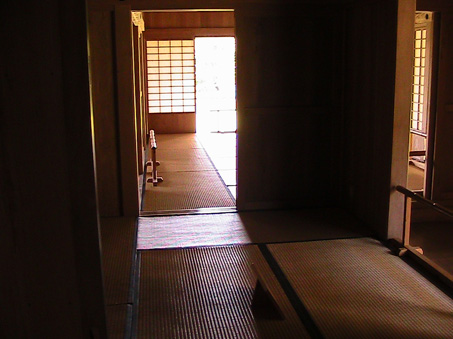 This is what all rooms look like. Narrow, quiet and quite cool. They say that this (the narrowness) is the reason why Kobudo techniques of Okinawa are so small.

And the great part was that you could freely walk everywhere! No guards or chains or locked doors anywhere. Except for this sign: 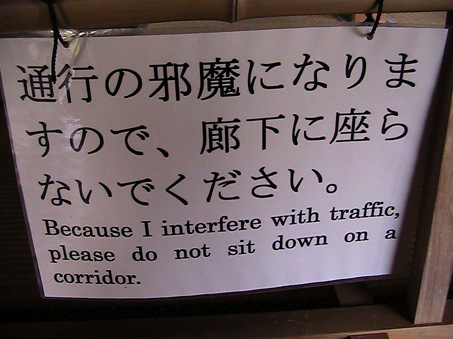 I think I know the meaning, but I’m not sure. You just got to love Japanese English…

In one corner of a room I found these roof tiles displayed. According to the sign, this is how roof tiles have evolved through the years (from left to right). The oldest model to the left, and new to the right: 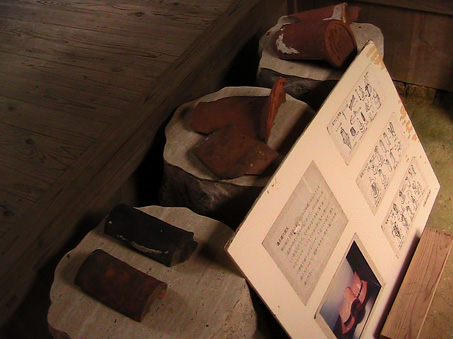 Apparently, if you can punch through ten roof tiles today, that would equal about five roof tiles of the older model. That’s how the quality has changed (worsened?) over the years. So, when we read old tales of masters shattering roof tiles, consider that!

Looking at all of these roof tiles, I suddenly heard a noise… my Karate sense was tingling! I quickly turned around, and… “Waah!” 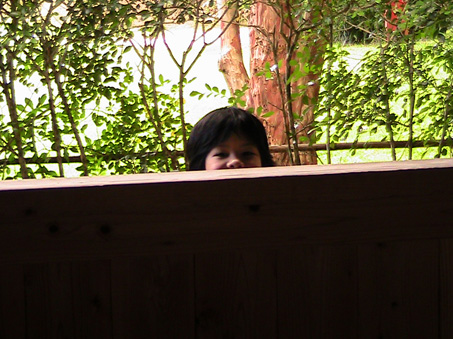 It seemed to be a harmless ninja this time (giggled and ran away), so I didn’t have to use my deadly ki-force today. Good, because I will need it for the competition next week.

Anyway, let’s go to the other side of the so-called “palace” (I think it’s a house more than a palace). Here was a terrace of some sort: 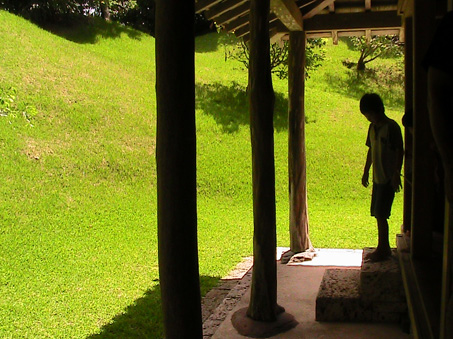 I can really imagine how hard it must have been for a king back in the old days. Just sitting there, listening to the birds, drinking ice tea, watching the grass…

A tough job, but somebody has to do it, right?

Here we encounter something strange though. When you want to go back inside (from the terrace) you almost bump your head in the ceiling!

Just look at this picture: 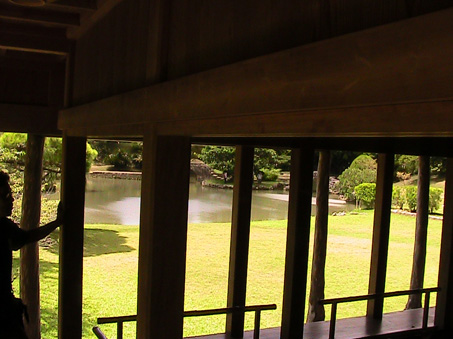 Why would somebody put a beam that low? It seems like a trap for tall foreigners!

But it’s not. The answer is as simple as it is clever:

It is a defense against swords!

If, for example, twenty samurai warriors one day decided to storm the Shikinaen “palace” they wouldn’t be able to use their swords to cut from above! The swords would just hit this wooden beam, and while the samurai are busy trying to pull their swords back, out of the ceiling, the guards of Shikinaen can easily take care of them.

Now let’s leave the “palace”. Look out from the window for a second: 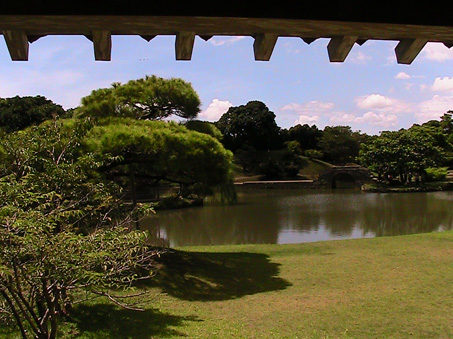 Do you see the forest behind the bridge?

Let’s head over there.

This small forest is quite remarkable. The plants and flowers are carefully arranged so we can enjoy the changes of the four seasons to the fullest. In spring, Ume (plums) grow. Beautiful Wisteria flowers grow in the summer, and in fall you see dark violet flowers called Kikiyo.

No detail is left out.

They even have the Habu (Okinawan deadly snake) sign: 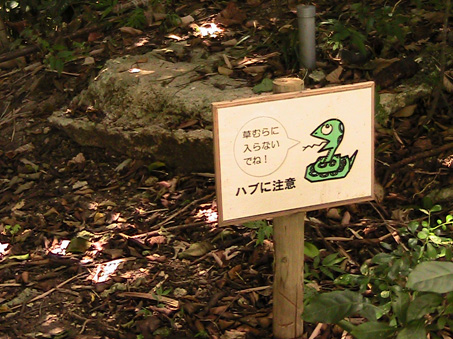 Luckily I never saw any of those.

What I did see though were these Shiikwaasaa fruits, as they say in Okinawan. They also go by the name of Taiwan tangerine, flat lemon, hirami lemon, thin-skinned flat lemon or the simply the latin citrus depressa.

Can we draw a parallel to Karate from that…? 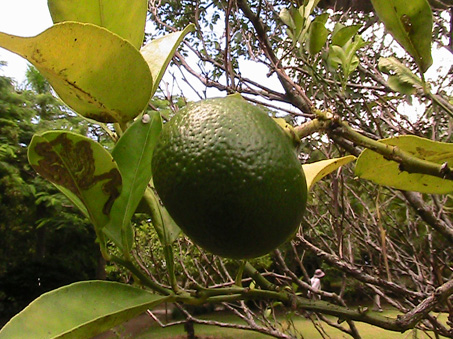 If you ever see one of these, smell it closely. It’s just lovely.

We will now head up these “stairs”. Watch your feet! 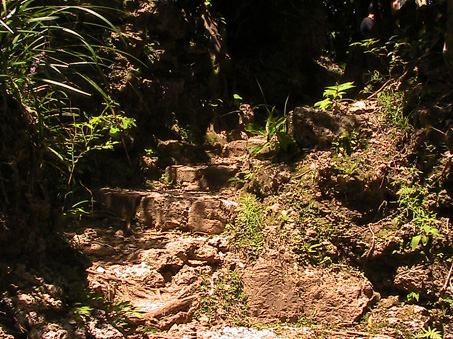 When you get up there are big stones all over the path, and according to my Okinawan sources that is the explanation for why we use a stepping motion with the heel first in some kata like Bassai Dai and Seienchin, for example. The dense vegetation makes it hard to see the ground even in daylight, and if you should accidentally step on a stone with the toes first, you would trip.

If, however, you step with the heel first, you can’t trip.

Is that the real explanation to why we step/glide with the heel first in some kata? I don’t know. But my guide that day was eagerly trying to make me believe that, as you can see from the above picture.

Now, I must be honest with you: This virtual “martial arts-trip” through Shikinaen park is almost over!

I only have one last picture left.

This is the view from a small hut at the other side of the forest. This is where the king brought his Chinese guests to show them that Okinawa is bigger and wider than they think. Today, what you see is just some houses, cars, streets… and other normal stuff. 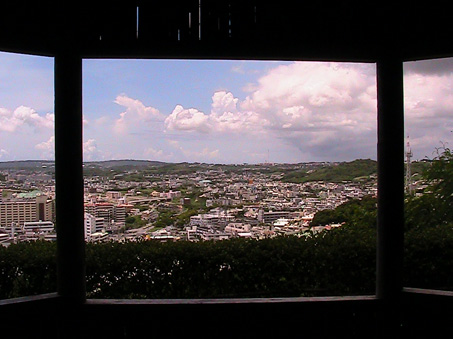 But look closely and see if you can spot anything special…

I didn’t think so…

Can you see the small yellow sign on top of a building far away, almost in the middle of the picture? A little to the right? If you see it, then you are now looking at the area where the Yamane-ryu style of Kobudo was born. History right in front of your nose.

Your virtual tour through Shikinaen park is now officially over. You now know everything worth knowing about this UNESCO world heritage site. At least from a Karate/Kobudo point of view…

So, like I said in the beginning (1’653 words ago!) you can now save yourself the trouble of going in reality!

But… if you really want to see all the boring beautiful scenery and wonderful fruit trees and glittering water and fantastic views and marvellous architecture and the terrific nature… then by all means, go!

But watch out for the giggling ninjas.

Don’t say I didn’t warn you… 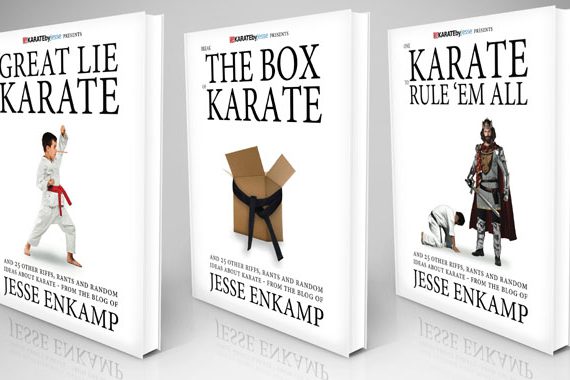 Your 3 ‘Best of KARATEbyJesse’ Books are Finally Here! 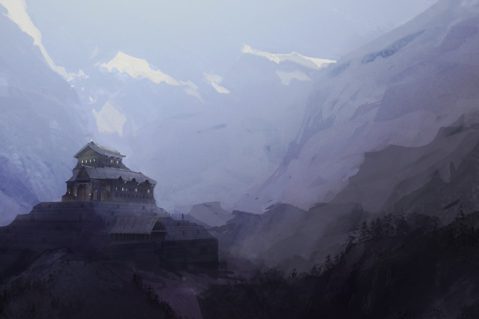 Pthu, Swoosh, Smack! – The Secret of The Temple 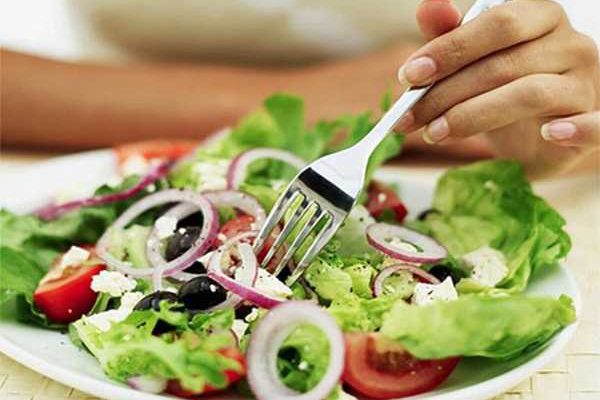