When people don’t understand things, they often find it easier to create their own explanations rather than to actually find out the real explanation. We see this all the time, in every part of society.

To psychologists, this behaviour is known as rationalization.

Karate is no exception.

And kata is a great example.

Out of all the unexplainable and unusual movements you’ll find in Karate, perhaps the king of all is the crouching position we find in the kata Kusanku (Kanku/Kosokun/Kushanku etc).

I’m talking about this move: 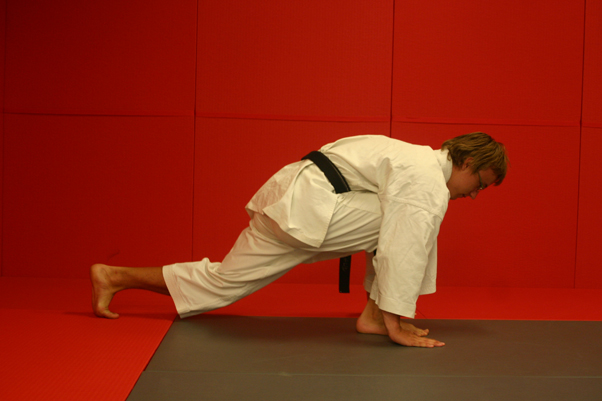 But what is the meaning of this movement? Why on earth would anybody need to crouch down like this in a self-defense situation? We all know that the ground is the last place you’d want to be on!

It makes no sense.

And that is the exact reasoning that has led some people to come up with very interesting explanations for this move right here. With the most common (and amusing) one being:

“It’s for fighting in the night!”

This move is apparently intended for being used when you are surrounded by ferocious samurai warriors, fighting your way through a horde of ninjas on the moonlit rice fields of Okinawa.

A quick Google search gives me several sources that cite this exact move as being an exceptionally clever technique for fighting in the darkness of the night.

Actually, let me quickly quote some parts from one certain article, written by a man who even calls himself a “Karate historian” (!):

Kusanku kata has traditionally been called the “night fighting kata.” It is obvious that Kusanku kata does contain techniques well-adapted to fighting at night.

While the inclusion of these techniques might be purely a coincidence, I believe it is doubtful the kata is also coincidentally called the “night fighting kata.” There is the fact that many of the techniques in Kusanku are well-suited, if not specifically designed, for fighting at night. Luckily, the basics of night fighting are all included in Kusanku kata.

Kanku also includes the remnants of the most obvious night fighting technique, dropping to the ground after the crescent kick. Many consider this move, which vaguely looks like the stretched out starting position of a sprinter, to be completely useless. Obviously such individuals have limited experience fighting at night. This technique also allows one to disappear into the darkness while simultaneously locating opponents.

Even on the darkest night, the sky is lighter than the ground. By dropping low to the ground, opponents are silhouetted against the sky. Not only does this allow one to locate opponents by viewing the sky, it also effectively allows one to disappear into the darkness.

By watching the silhouette, it is possible to determine when the attack is coming.

Kusanku contains many techniques that are essential for fighting at night. While many have recently dismissed the “night fighting kata” as pure myth, the techniques themselves reveal the truth.

So, what this article basically says, is that we are dropping down to the ground in the middle of a fight, so that we can hide from our enemies (apparently they are numerous!), while locating them through searching for their silhouettes against the sky?

And the crazy thing is, I’ve both read and heard this many times before!

Mr. Karate historian is not alone!

Now, I don’t know what you think, but I think this myth is similar to the naive belief that Karate was a system developed by peasants in the “cover of nightfall” during Okinawa’s old Ryukyu Kingdom in order to overcome the despotic Satsuma Samurai occupying their island!

Of course, no one is suggesting that such a thing is beyond the capabilities of farmers (as similar history elsewhere has been written in blood) but it’s simply not the case here!

Okinawa was in no position to offer resistance when the Satsuma samurai invaded, and their reign remained unchallenged in the Ryukyu Kingdom until the island finally fell under the jurisdiction of the Meiji government and ultimately became an independent prefecture called Okinawa-ken (Okinawa Prefecture),which remains to this day.

Still, we continue to hear myths such as “the high kicks of Shotokan’s Gankaku kata are designed for kicking a samurai in the throat, while he is sitting on his horse, through the small opening under his helmet” or “these last backward jumps from Shotokan’s Chinte is for when your hands and feet have been tied together by ninjas, and you need to jump to freedom through the rice paddy.”

I’m not making these up.

There are actually people who believe these stories!

And I have about a dozen more examples – including fighting when carrying a baby on the back (!), fighting on boats, rivers, in castle hallways and much more. What they all have in common (besides being funny) is that they effectively draw the attention away from the important fact that Karate is a pragmatic martial art designed for close quarter self defense, and instead focus on ridiculing the intelligence of every serious Karate practitioner.

So, this post is basically about showing that the “drop-down-and-hide-in-the-darkness-from-ninjas” move from Kusanku actually does have a few different practical martial applications if you just look for them!

And, acting as models, I have my loyal Karate slaves colleagues Jesper “The Ninja Hunter” and Oscar “The Samurai Executioner”:

Okay, enough photo editing, on with the good stuff:

Here’s 11 Useful Bunkai For The Kusanku Ninja Move (or whatever you call it). 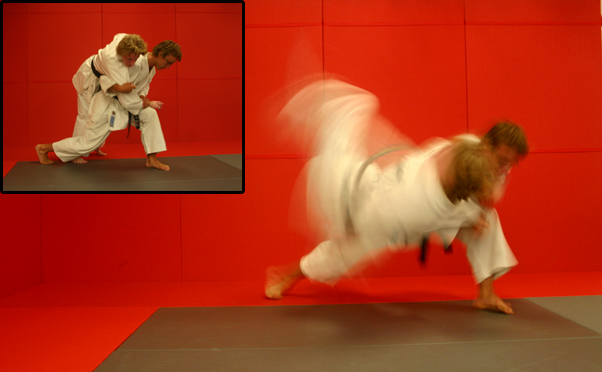 Straighten the back leg to flip your opponent over, while pulling down to the ground. You can grip basically however you like, including the neck (kubi-nage). 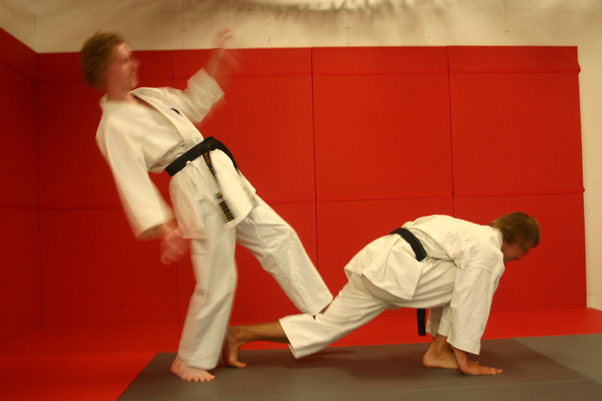 You can go for one leg or both. 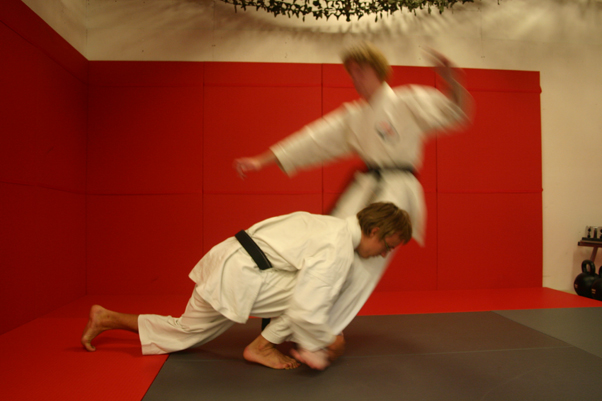 A normal double leg takedown. Nothing fancy. Grab the heels and push with your shoulder (using your legs). 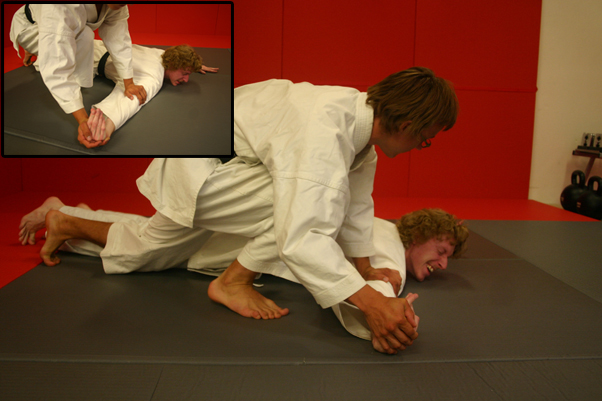 This is a submission hold, popular in Aikido, where you press down on your opponents elbow with one hand and twist/bend his pinned hand towards his head. Very effective!

Keep you opponents hand above, or parallel to, shoulder level for maximum efficiency. 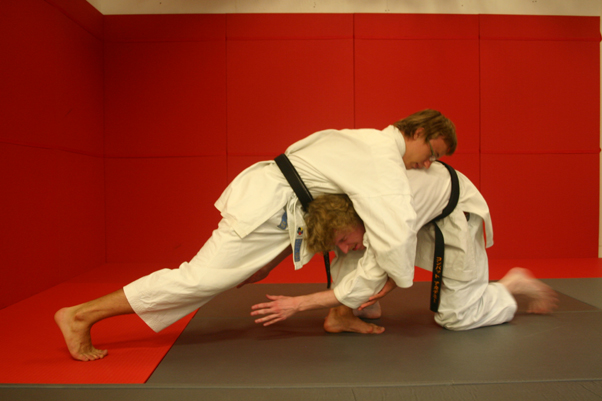 When your opponent reaches for your front leg, kick back, lower your hips and place your weight on top of your opponent. Bonus points if you knee him in the solar plexus at the same time! 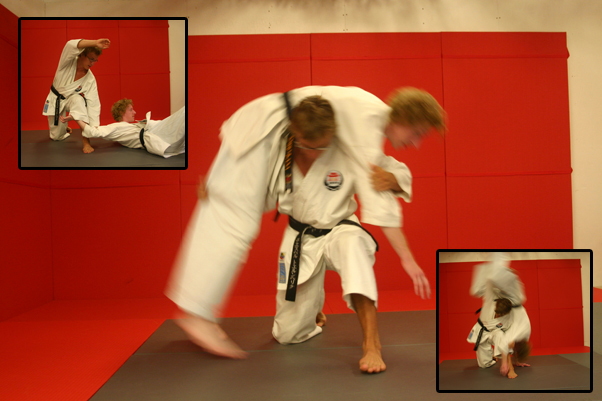 And yes, the pictures are in a strange order, but I hope you get it anyway. On a side note, some people might find this technique far-fetched, and I might agree. But try it anyway! 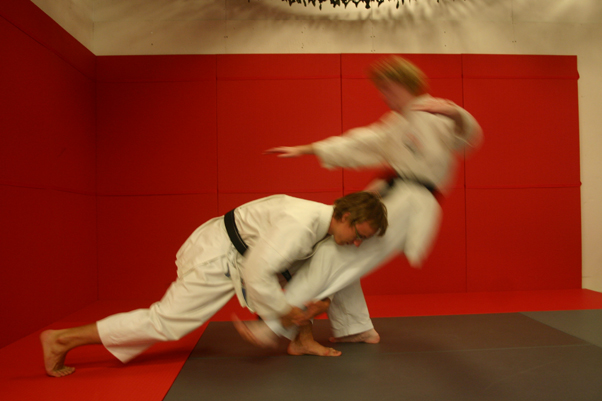 Almost the same mechanics as when you do the double leg takedown (#3). Except you should be pressing against the knee with your shoulder, not your throat (!) like in the picture…

Am I the only one smelling a degradation around the corner? 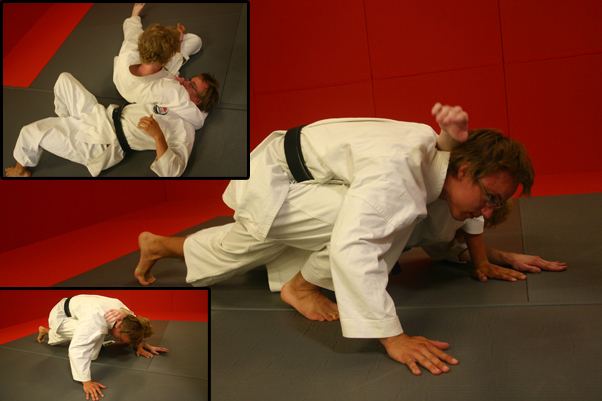 Okay, okay, before you say anything, I know this technique looks strange.

It is actually taken from Brazilian Jiu-jitsu (sic) a long time ago, so it definitely works though. It’s a shoulder/elbow lock that you do after having escaped from the reverse side control position (kesa gatame). The lock is applied when you lower your shoulders and straighten your neck.

Of course the actual kata doeesn’t feature all of the steps required to end up in the correct crouching position for this lock, but that’s not the point. And it’s a great move nontheless. Surprisingly painful!

9. Evil Face Crusher That I Couldn’t Make A Japanese Name For 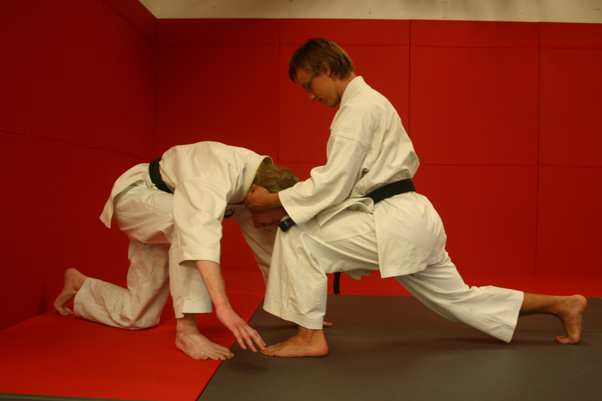 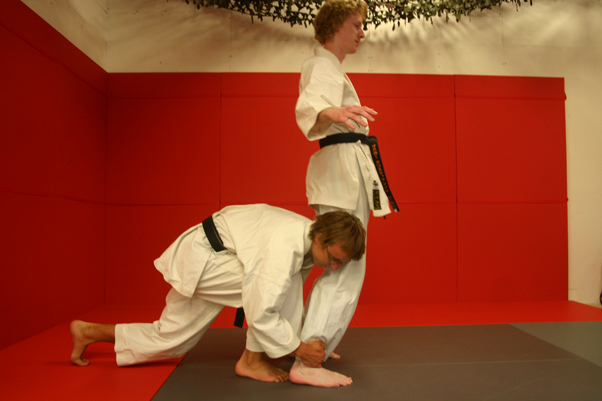 Just like when we did the takedown from the front, it works equally well from behind.

There’s some nasty follow-up techniques from this one! 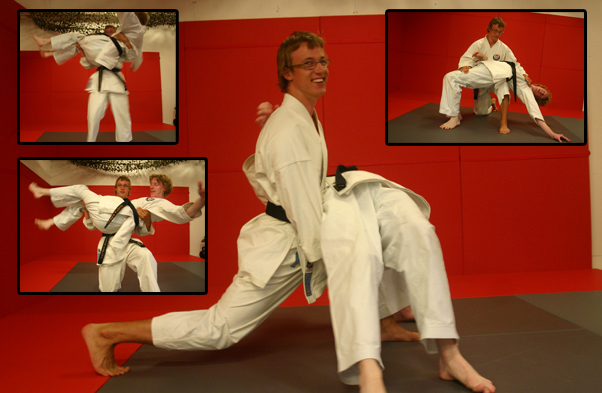 And last but not least, when you feel utterly sadistic. The back breaker.

I mean, just look at that evil smile!

Works great if you catch a leg, spin around, then drop down.

So, that’s basically it.

Instead of making up (and believing) all of these fancy stories just because some techniques (or whole kata!) look unexplainable or unusual, try to sit down for a moment and think, and I bet you’ll come up with a lot more ideas than you believe you could.

Discard the former, keep the latter!

And for those of you who can’t swallow fact, just keep eating fiction. 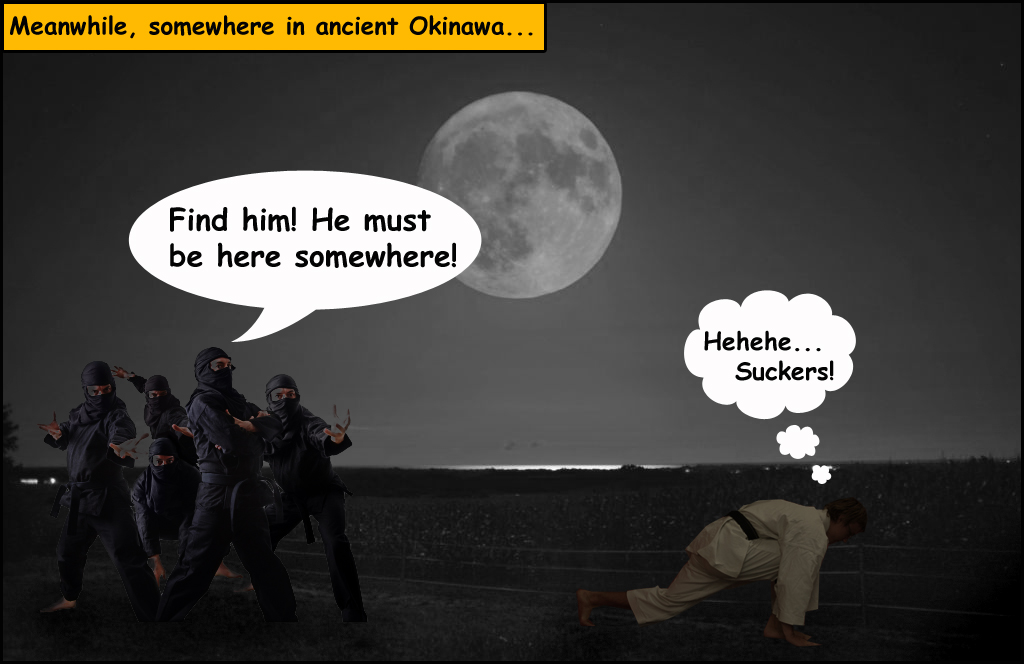 “Truth is stranger than fiction, because fiction is obliged to stick to possibilities; truth isn’t.” 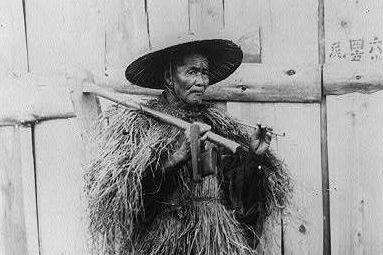 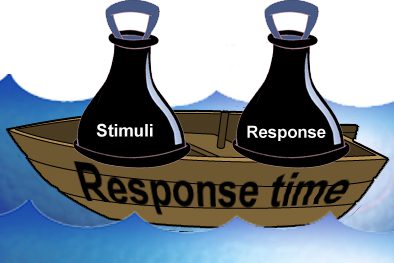