“The K is on the Way”: An Exclusive Interview with the President of WKF – Karate’s Controversial Road to the Olympics 2020 (pt. 2)

Note: This is part two of my exploration into Karate and the Olympics; interviewing the president of the WKF (World Karate Federation), talking about the “Karate 2020/The K is on the Way” project and more. Check out part 1 if you missed it!

All right, so here we are.

The time has come.

After briefly covering my own reflections on Sport Karate, Traditional Karate and everything in between (in part one) – dishing out some of my semi-philosophical Karate rants that you love or hate – the time has finally come for me to step aside for the grand finale of what you’ve all been waiting for.

With the Big Boss.

Without further ado, let me hereby present you with the coup de grâce on this two-part article series on Karate and the Olympics, featuring Mr. Antonio Espinós – president of the World Karate Federation (WKF).

Again, making this interview happen was no easy decision, since topics like these can be quite delicate as they are prone to misinterpretation by people with a differing political agenda. Therefore, as a disclaimer, may I remind you that all my own commentary is solely my own and not representative of the WKF, IOC or any other governing body/organization. Truth be told, some questions even had to be cut out of the interview for fear of legal repercussions, so please apply some of that good ol’ common sense when enjoying the following interview… and try to visualize the bigger picture we’re painting, okay?

J (Jesse): First of all, Mr. Espinós, could you very quickly sum up the “KARATE 2020/The K is on the Way” campaign (for people who don’t know about it)?

AE (Antonio Espinós): “Well, obviously, the “K” identifies Karate with one strong letter. This is simple and absolutely international. The “Way” is then intended as a symbol: Every way has a beginning (our strong roots and origins), a course (the hard work done by the whole Karate family to improve this unique, different and universal discipline) and a final destination: the Olympic Games Program.”

J: Sounds like a plan! Tell me, who are the main people responsible for launching/maintaining this global campaign? And what is the main objective really about?

AE: “WKF and its partners prepared and launched this campaign. We’ll be running main actions, website and social media. But it is now up to National Federations and Karate enthusiasts like yourself to spread the message and reach as many more people as we can. Lots of Karate events worldwide have already been “K” events and more will be in the next months.

The main objective is letting the World know that we are seeking the inclusion into the Olympic Games program, hence improving Karate’s visibility worldwide. But we also wanted to give the opportunity to the global Karate family to be even more united by joining us in the bid.”

J: A noble goal, I think. Looking back though, historically, how has the relationship evolved between Karate and the Olympics?

AE: “It has been more than fourteen years now since the IOC recognized WKF. Karate is actually already an Olympic Sport. We now make our third bid in a row to be included in the Olympic Games Program which is the next step. We’ve been very close to achieve this in former bids. This means that there is a strong relationship between Karate and the Olympic Movement. We listened and learnt many positive things from them and this has helped us reach a state-of-the-art level in many aspects.”

J: So, how is the “KARATE 2020/The K is on the Way” campaign important for the average Karate practitioner? Will it not just benefit elite competitors and national teams?

AE: “Well, first of all, as we said before: Since this is a global campaign, there is therefore an opportunity to unite all our people and stakeholders worldwide. Second is the aim of the campaign: The potential benefits of being included in the Olympic Games Program are what make this campaign so important for the Karate world. Third is the opportunity to bring media exposure to a global leading sport. Karate is one of the most important disciplines in the World, with more than 100 million practitioners in total. It is different, unique and universal but remains quite unknown for many people! This campaign should let the World know what Karate really is: a global leading sport.”

J: But practically speaking, how will the average Karate practitioner benefit if Karate actually becomes an Olympic Sport?

AE: “It is safe to say that the material resources available for Karate development will increase significantly the day that Karate becomes a sport in the Program. Today, in the majority of the countries, and especially in underdeveloped countries, or countries under development, only Olympic sports can become institutionally funded. Thus, an Olympic Karate would use this additional funding to accelerate the social benefits derived from Karate practice.”

AE: “There are many other potential benefits within this inclusion in the Olympic Program too. For instance, we could speak about structures, incomes, visibility etc. But the most important matter for Karate practitioners may be the actual recognition. Karate practitioners worldwide really deserve to see their discipline included in the pinnacle of sport events. Above all this, we are one of the sports with the highest young practitioners’ ratio; youth comprises 65% of karate practitioners! We must offer these young Karate-kas the possibility to be Olympic one day.”

J: I definitely see what you mean. With modern martial arts like MMA quickly climbing past Karate on the popularity ladder, we have a responsibility towards keeping the flame of our art lit. But still, many traditional people think Karate will become reduced to pure “showmanship” or “flashy acrobatics” if it becomes an Olympic sport! What is your take on this matter, and why?

AE: “Karate is so popular worldwide precisely because it has developed and spread as a sport. The martial art side of Karate has in this way benefited greatly from the sport, and it would be an activity hardly as popular if it would have been limited to the martial art aspect alone. In this way, the sport has enormously contributed to the spread of Karate – including those who want have the possibility to focus only on the practical martial art aspects.

The WKF has always tried to keep the principles of respect, rigor and other features that are promoted by the traditional martial art side intact. It is up to us to maintain, and if possible even enhance, these principles. In the WKF we do not see that the Olympic Games should bring any negative connotations in this matter. 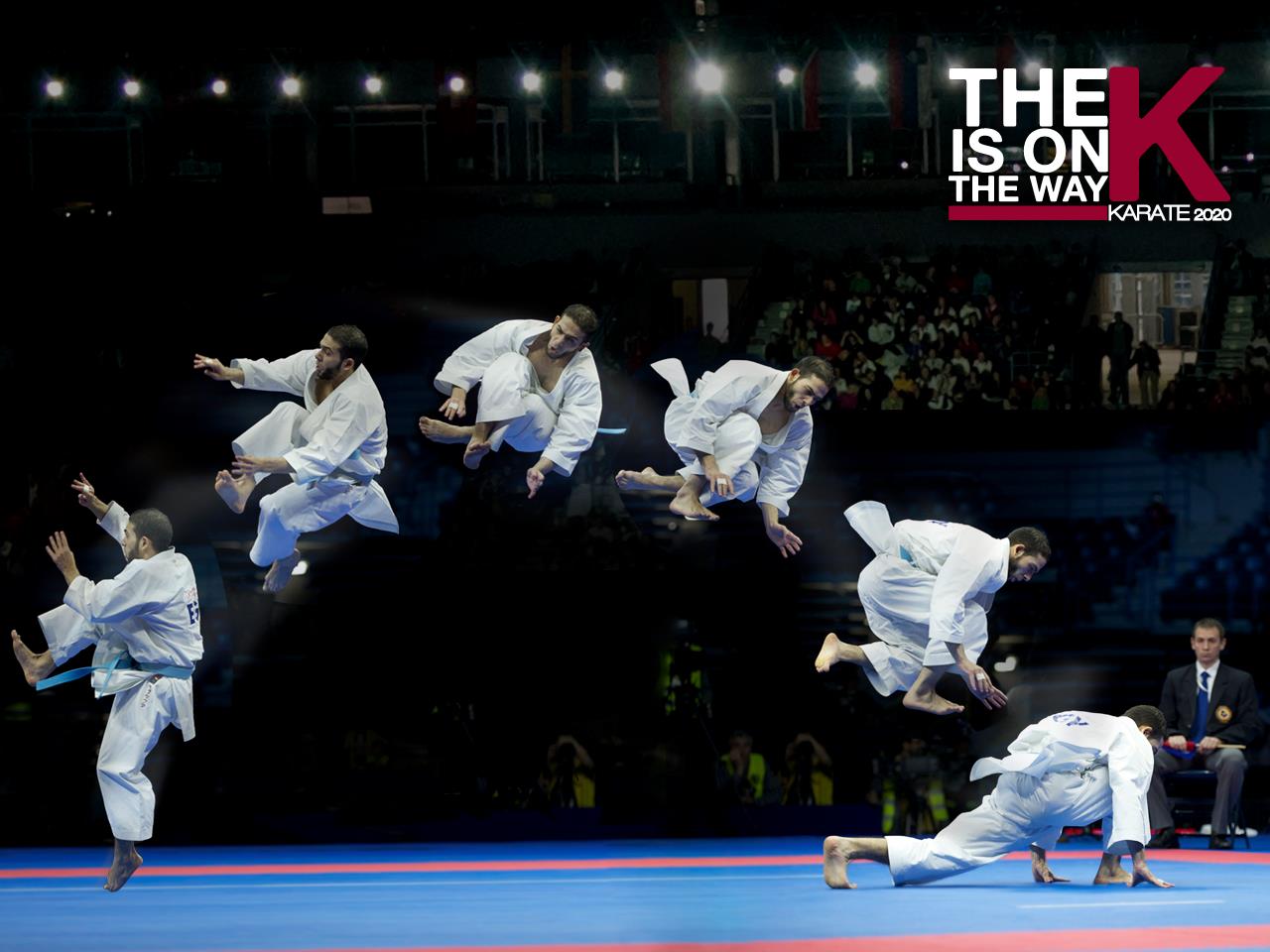 The Olympic Games are the greatest sport event in the World. No question about it. It is a serious competition at the highest level, not some kind of special “show”. There is no need to change or adapt the rules to be part of this competition. Actually, the WKF proposal to the IOC is based on our own, current, competition format. Karate is already a spectacular enough sport, and its roots are strong enough. This will not be a concern at all.

J. That is very true. But, like I explain to my readers [see part 1], humans have always been afraid of change, often clinging to negativity purely by default. So do you truly believe that the “Budo Spirit” can be rightfully conveyed through sports and the Olympics? How, exactly?

AE: “Sports and the Olympics are the best way to convey Budo Spirit! And Karate is really the highest ambassador of this and other values.

Of course, this is also about what Karate can bring to the Games, not only what the Games can bring to Karate. The real fighting spirit; as well as fairness, humility, respect, integration and overcoming difficulties are some of our most treasured inner values. We shall dutifully bring these to the Games as part of the original essence of Karate.”

J: And I sincerely look forward to seeing that unfold. However, as we all know, Karate is a (dangerous) martial art, not originally designed for sporting purposes. So, coming from that angle, what are the main obstacles you see in trying to make it a (safe) martial sport?

AE: “Well, we all know that part of the public will always see Karate as just simple violence. But we also know that Karate competition is about control. And Sport Karate is already a very safe martial sport! In fact, a lot of work has been done in this aspect, and we are quite happy about it. Now it is time to change minds at this respect, and the Olympic Games will help us to do so.”

J. How do you think the Olympics (and “KARATE 2020/The K is on the Way” campaign) will ultimately influence the relationships between Sport Karate and Traditional Karate?

AE: “The campaign slogan is “Karate 2020”, we are not trying to take just a small part of Karate to the Olympic Games, but the whole Karate – with its complete values and roots. Once again, these roots are strong enough; they are part of a modern and spectacular competition form already. The “Way” is intended as a symbol of all this!

J: Right. So what does the near/far future look like for Karate as a whole, if “KARATE 2020/The K is on the Way” campaign succeeds with this mission?

J: Sure, as long as those values are actually maintained, promoted and (correctly) applied – I see a brilliant future indeed. A great challenge too! Any last thoughts, ideas or comments for my readers?

AE: “Jesse, this is a long term campaign and each and every supporter counts. This is not only a WKF campaign. Every practitioner and Karate fan around the world should feel as its his/her own. In the end, I believe Karate will be in the Games, because Karate deserves the Games.”

J: Thank you very much for your time. 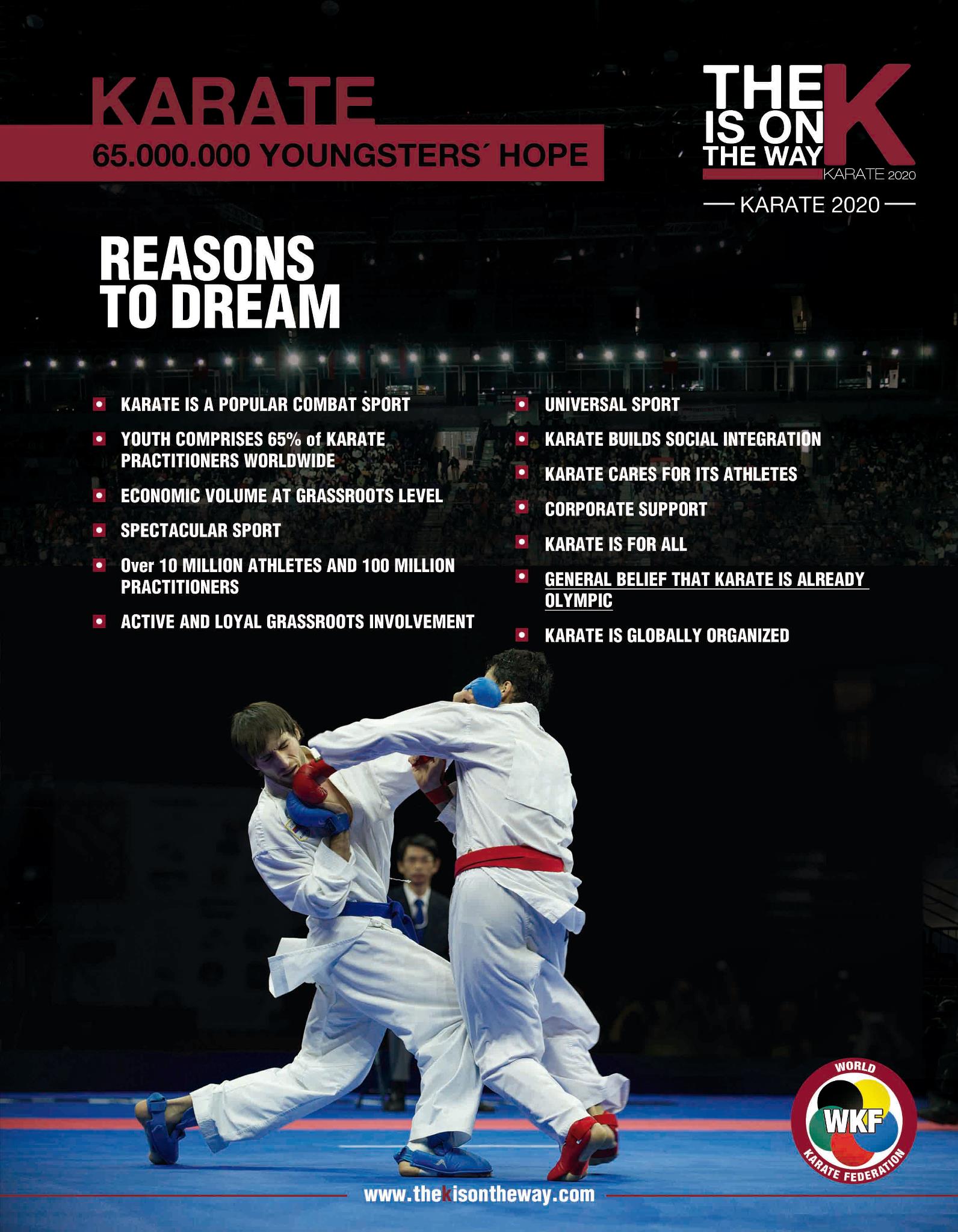 All right. That was the interview.

No matter what way of Karate you are following – Fitness Karate, Traditional Karate, Sport Karate, Self-Defense Karate, Okinawan Karate or any other preference – we are all one.

And no matter what goal you have with your highly personal journey in Karate – whether it’s improving self-esteem, gaining confidence, losing weight, becoming a champion or learning practical self-defense – I sincerely believe that there are two incredibly important guidelines that you need to adhere to:

The bottom line is, no matter what you think Karate is, or should be, you need to care.

Care about the small stuff as well as the bigger picture.

Because caring is what ultimately allows us to remain in control over our future.

The minute we lose control, the minute we stop caring for the destiny of Karate, we are no longer taking part in the amazing development of Karate that is taking place in the world right now. You don’t make progress by standing on the sidelines, whimpering and complaining.

You make progress by implementing ideas.

And right now, Karate needs all the ideas we can provide. Especially from the traditionalists. Because all change is not growth; as all movement is not forward. It is up to us to steer the boat of Karate into the right direction, unless we want to hit those nasty rocks which we all fear.

But one that I happily choose to be a part of.

I hope you do the same.

“The ultimate aim of Karate lies not in victory or defeat, but in the perfection of the character of its participants.”

The K is on the Way. 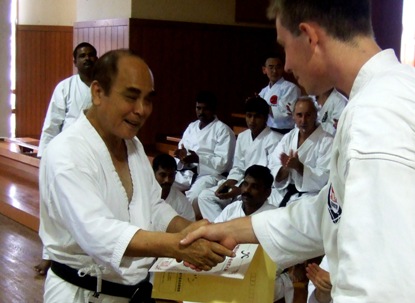 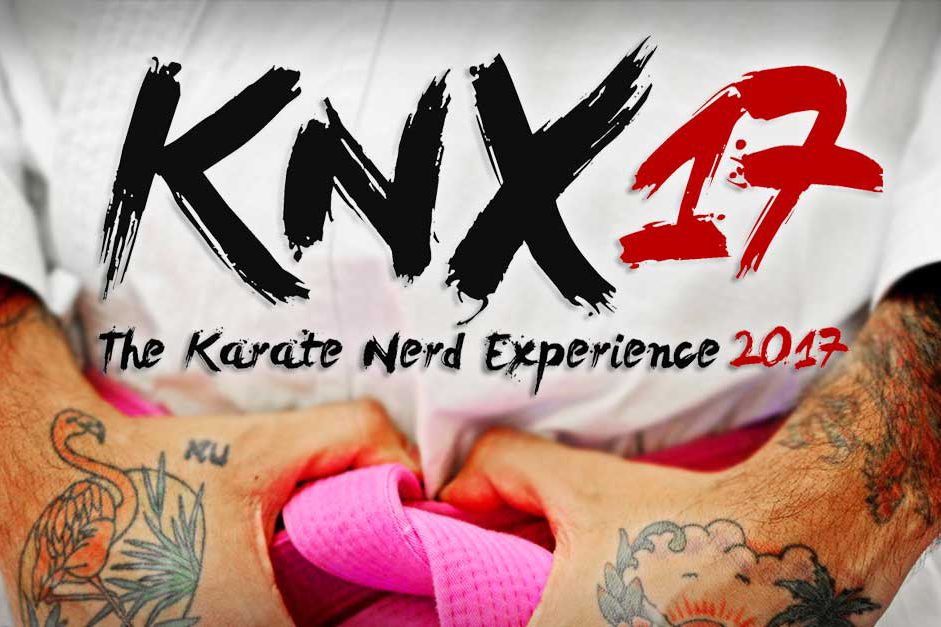 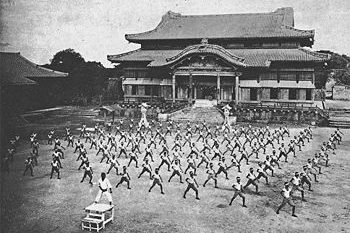 The Birth of Today’s Karate